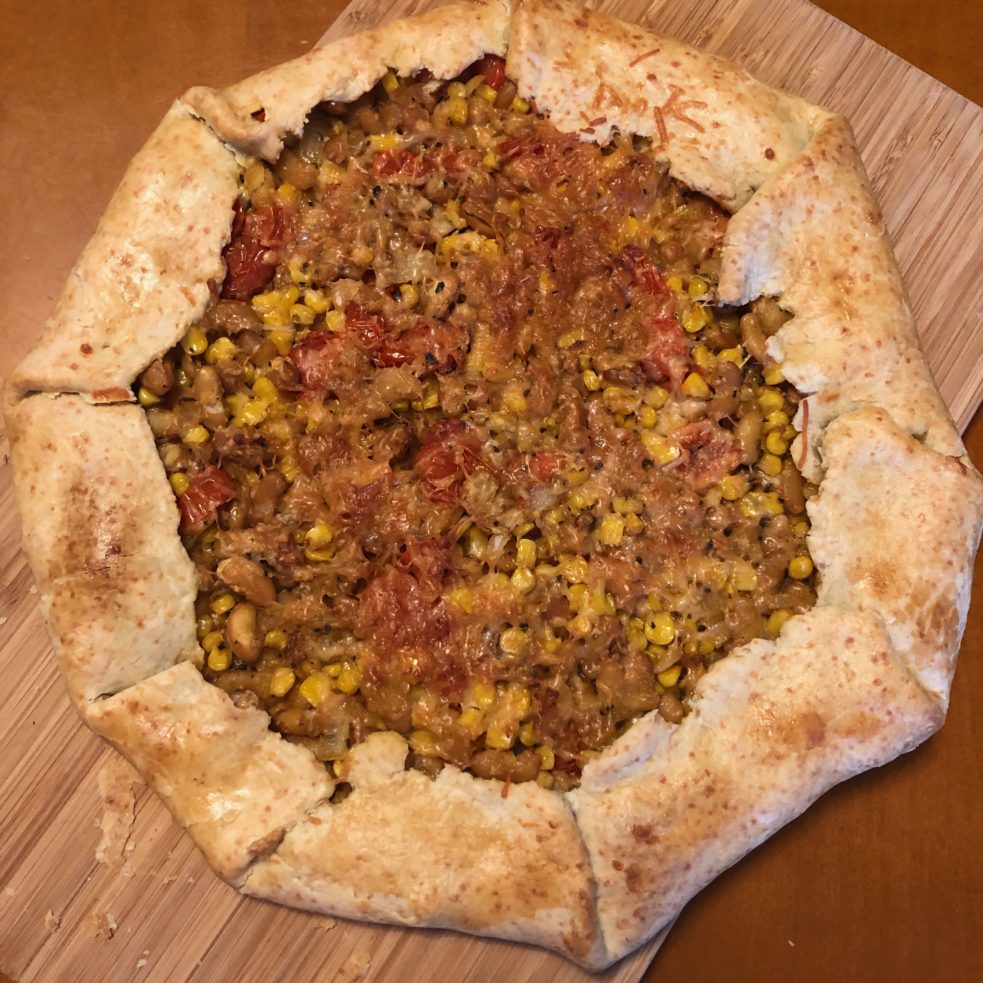 I love pies. Pot pies, sweet pies, hand pies. Anything with a crust and a filling makes me happy. During these pandemic times, I’ve been revisiting the galette, an open-toped pie with folded-over edges. It’s delicious and delightful, and I made one last night. It was a huge hit, so I thought I’d share the recipe with y’all.

First of all, I used this recipe as a loose jumping-off point. In fact, I followed the crust exactly: it’s easy and tasty, and I looove the addition of the parmesan. More cheese is always a good idea if you ask me. I also love the use of the food processor to process the crust. Since you have to chill it for 30 minutes, I suggest starting with the crust, putting it in the fridge, and then getting all of your ingredients together.

For the filling, I used the following:

Preheat oven to 375, and if you’re using a pizza stone (I highly recommend you do so for this – it makes the crust so nice and crusty on the bottom), put that in the oven to heat with your oven.

If you aren’t using a pizza stone, you can put parchment paper on a large baking sheet, or spray olive oil on it.

Heat about 2 T of olive oil in a skillet (I use a big cast-iron one). Add garlic and onion and cook until it’s all fragrant and yummy-smelling, and the onion is translucent. Add basil and oregano. Then add corn and cook for a few minutes. Toss the tomatoes and beans in, and season to taste with salt and black pepper. Cook until tomatoes are a bit wrinkled and have released some liquid and beans are heated through.

Get your dough out, and put in on a large floured surface to roll out. I usually either clean the hell out of my counter, or put 2 cutting boards side-by side. Sprinkle the flour on the rolling pin too and roll that out. You want a rough circle that’s about 6-8″ larger across than you want your galette to be. You also want it about 1/8″-1/4″ thick. Take your pizza stone out of the oven if you’re using one (carefully – it’s hot as hell!) and, using your rolling pin as a curtain rod, of sorts, pick up your dough, placing it centered on the pizza stone or in the center of your baking sheet. Use a fork to poke holes all around the center of the dough (this will help it not bubble up so much).

Sprinkle a bit of parmesan (or whatever cheese you’d like to use) on the center of the crust. Spoon your filling onto the center of the dough, making sure to leave 2-3″ unfilled all around. Sprinkle more parmesan on top of it. Fold dough up around the galette, pleating it a bit like in the photo (or, honestly, whichever way you’d like to fold it). Use an egg wash or a nut milk wash around the edges if you’d like (for an egg wash, whisk an egg and some ice water together, and brush it on the crust; for a nut milk wash, brush some almond or other nut milk on the crust).

Bake it for 30-40 minutes, until crust is golden brown. Eat with a green salad (or whatever you’d like to have with it). It’s even good cold the next day!