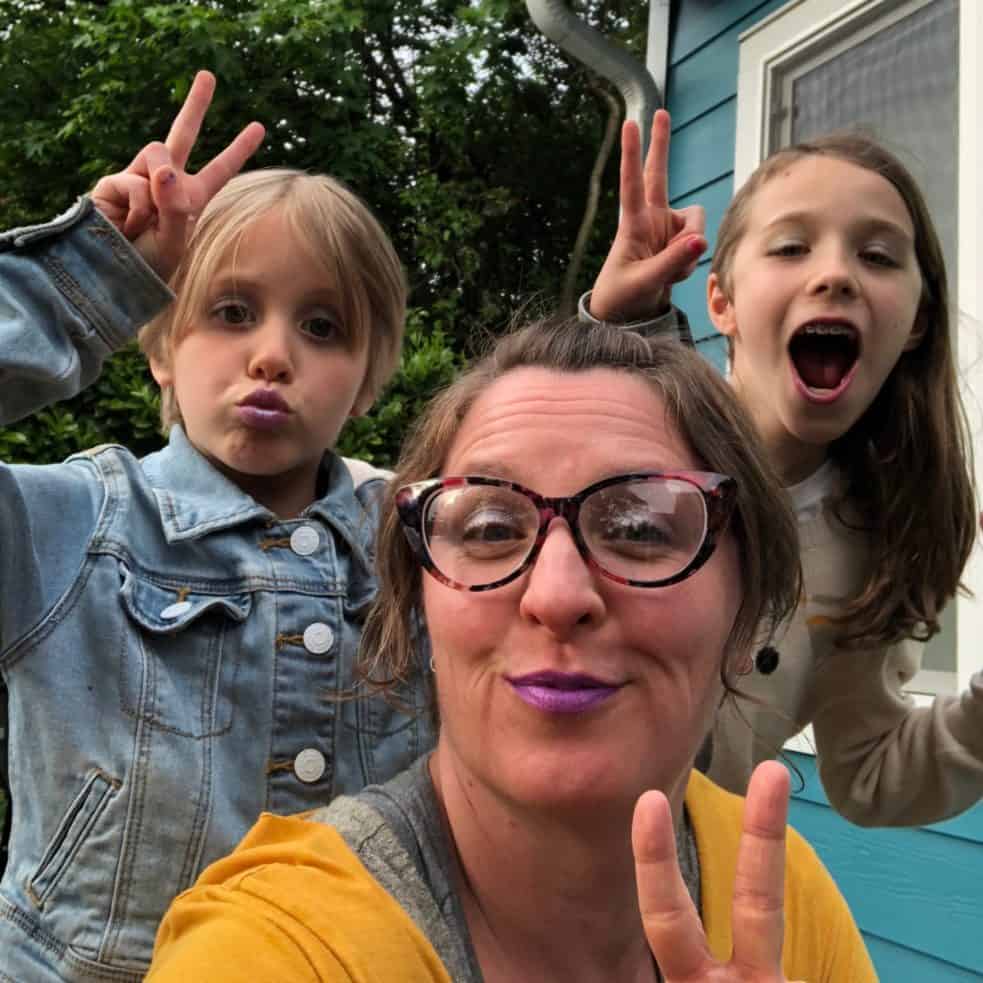 I used to be super skinny. Like, never-had-to-think-about-what-I-ate naturally skinny. For so much of my life, well into my 30s, and until I did two things in a very short period of time: quit smoking and got knocked up.

Because of the natural slender state of my body, I never thought about how I looked in clothes. I was super fortunate in that I didn’t have a lot of that self-critical baggage that many women have. I didn’t hate my body or my face. I was just kind of content with who I was and how I looked. After pregnancy, nothing physical snapped back like I had just kind of assumed it would. I started to more fully understand how other women felt about their bodies, because mine was not behaving in the way I was used to it behaving. Another pregnancy, another twenty (or so) pounds. Almost seven years later, and here I am. Not skinny. Not smooth. A little bit lumpy. Chubby. Maybe even (to some people) fat.

I’m thinking today, as I write this, about a couple of times since this sea change in my body type, when other women, quite inadvertently, have absolutely destroyed how I felt about myself. One time, back when I still had the shop, I was feeling pretty cute. It was a few months after Astrid was born, and I had a pink skirt on, with some of those spanks-ish undershorts underneath to kind of hold things in and smooth things out. I was chatting with a group of ladies that frequented the shop, and one (the very oldest) reached over, rubbed my belly, and congratulated me on being pregnant yet again. Gritting back tears, I squeaked out, “oh, I’m not pregnant, gotta go get back to work,” ran into the back room, and cried for a good long while. It was heartbreaking to feel so cute, and be told that not only was I not achieving the look I was going for, but I looked, in fact, like I had a bun percolating in my gut-oven.

Another time, a few years later, and me with the same basic body. I was in line at the grocery store, in another cute (I thought) outfit. This time, a dress with a full-ish skirt and a high-ish waist. Deep pockets, super comfortable, a fun print. Pretty much the ideal dress. I was the second person in line, and was looking at my phone. I made a noise reacting to a funny text, and the check-out woman gasped, and said, oh, don’t have that baby here! WHAT? I said. She said something about how I looked like I was about to burst, pregnancy-wise, and she wished I would not go into labor in her grocery check-out line. (To be totally fair to me, I did NOT look that pregnant. I would argue that I didn’t look pregnant AT ALL, but this woman kind of killed my love for that adorable dress.) The absolute worst thing was, she kept going. She would not shut up. Picture this: I’m standing there, waiting for her to ring through my weeks-worth-of-groceries-for-a-family-of-four, trying not to literally perish from embarrassment and self-loathing, and this woman keeps stammering and making excuses for why she assumed I was pregnant. Finally, I looked her in the eye, and said, as kindly as I could: “You need to stop. You should never tell another woman she looks pregnant. You should never assume anything about someone else’s body, let alone comment loudly on it. You need to stop talking.”

All of that to say, being a woman in this image-centered world is hard. Trying to see myself without all of the damned self-criticism and body-baggage, let alone the inadvertent criticism we women share with one another. Trying to look past the round belly, the saggy arms, the wrinkly-getting skin; those parts of my body that are so so different than they used to be. The parts that are showing their age and reactions to snacking and life and time. And getting to a place where I’m truly happy with who and where I am. Add to that the fact that I do my own modeling for my knitting patterns, and, woah, doggy. Can you say, constant-attempts-to-circumvent-self-criticism? Fortunately, Stefan loves the heck out of me, and his photos are, for the most part, taken full of love and admiration, so they are generally fairly complimentary. Plus, he never even shares the truly horrible ones with me. Unless, of course, they are hilarious, in which case, he generally makes gifs out of a few of them strung together.

I wrote a bit about this a few months ago, talking about my dressmaking and tattoo obsessions. Both the making of my own clothes and the getting pricked by super sharp needles for countless hours has helped me to accept my physical self. Having good friends who I have long conversations about this with (I’m looking at you, Lorajean) has been instrumental in my journey to radical self-acceptance.

And, I won’t even get into the whole “comparison-is-the-thief of joy” situation that our social-media-centered world lays on us with the striving for likes and clicks and engagement numbers. It’s particularly difficult when you have a business that relies on folks reacting positively to the aesthetics of your business, and by extension, you. There’s the selfie situation, and the careful application of filters, and taking a bazillion photos to find the one you are happy with. And all of this through the lens of our self-criticism.

Today, I’ll just leave you with the fact that I did, recently, purchase a [high-waisted] bikini bathing suit, and I will be wearing that bathing suit on the beach in Mexico with dear friends in a couple of weeks. And I will try really hard to rock that bikini, and leave all of those feelings of fatness and inadequacy and self-criticism in the suitcase, because they don’t belong on a beach in Mexico, am I right?

So, without further ado, but with a huge lump of anxiety in my belly, here are some photos of me, lumps and all, in my bikini. 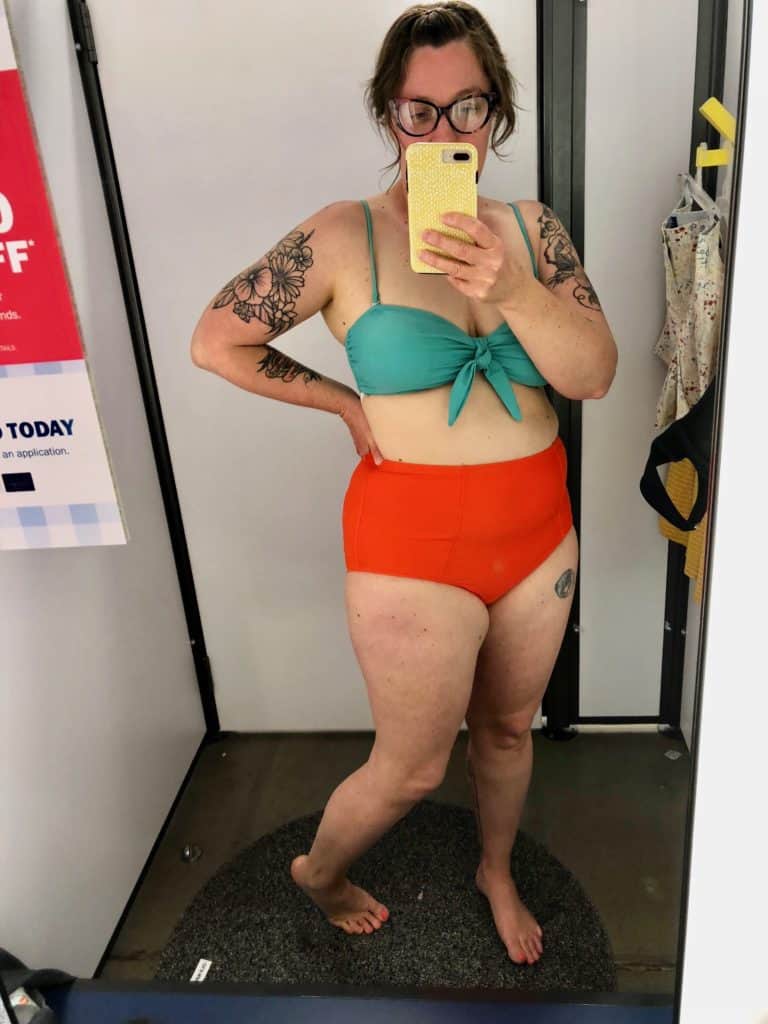 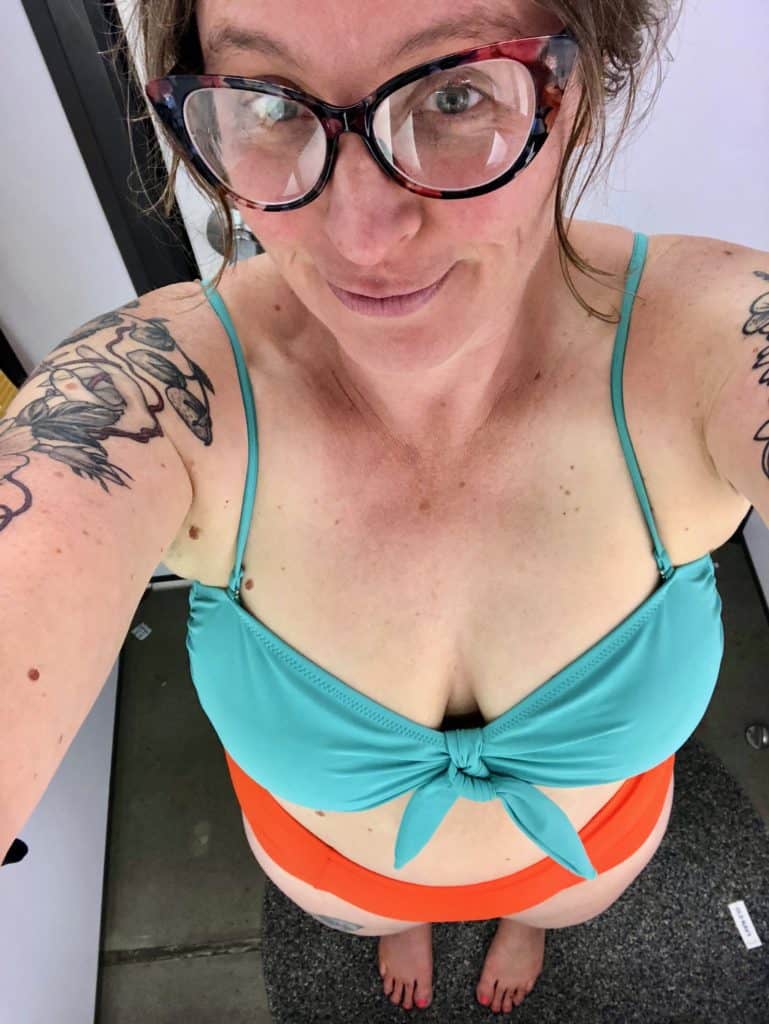